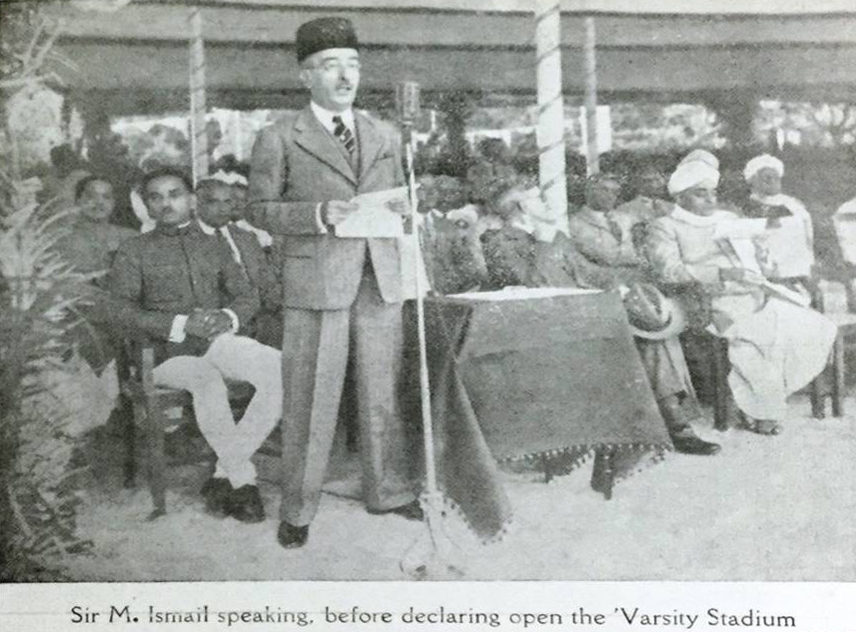 The vision of the Physical Education department is the development and promotion of sports activities for health, educational and social benefits of student community. Accordingly, the Dept. has adopted the following mission:

The University provides a wide range of top quality shared sporting and athletics facilities which will be promoted and available for use by students, colleges, clubs, individuals and other community groups. The University stadium spreads across 8 acres and 40 cents of prime property in the heart of the Trivandrum city. The University stadium is a multi-purpose stadium and is one among the foremost synthetic track athletic stadiums of the country. This multi-purpose flood lighted sports venue is one of the most demanded sports venues which hosted two National Games and other national and international events. The stadium has an eight lane athletic track, warming up lanes wrapped inside a football field with throwing sectors, jumping pits, Volleyball court and Basketball court outside, with lush green shade trees around the pavilion.

A physical fitness centre is operational at the University stadium in order to gear up for extensive physical activities and sports conditioning workout in the gymnasium. The centre has almost all the requisite instruments and equipment required for exercising.

Apart from the aforesaid facilities, the University has a roofed Basketball court in its main campus, adjacent to the Senate Hall. Incidentally, this court is said to have been the first Tennis Court in Trivandrum. A mini stadium is also there at Kariavattom campus.

PROGRAMMES / ACTIVITIES OF THE DEPARTMENT

A meeting of all Physical Education Teachers of the affiliated colleges of the University is conducted at the beginning of every academic year to prepare and approve the sports calendar as per the AIU schedule for the year and to discuss the matters related to the conduct of intercollegiate tournaments namely, the nomination of zone conveners (South & North), dates and venues of the inter collegiate tournaments and nomination of selectors for the selection of zone level players. The comprehensive and varied intercollegiate programme designed to meet the needs and interests of the students generate a spirit of healthy competition and works to encourage a healthy student life environment. Intercollegiate tournaments are conducted once in a year, either on single zone or on two zone (South and North) basis depending upon the number of entries. The teaching departments of the University Campus are considered as one unit and included in the south zone. After conducting the zone tournaments I, II and III place winners from both zones will qualify to participate in the inter zone tournaments from where the champions will be decided.

University Team Selections: The University teams are selected for participation in the All India Inter University tournaments. For games which runs on zonal and basis, a preliminary selection is done at the zonal level by a zonal committee. In addition to the players of the three qualified teams from each zone, the outstanding performers at the zone level tournaments are also eligible to participate in the inter-zone selection trials. The total number of such players selected must be limited to the total number of players allowed to represent a team. The final selection is made by a committee constituted by the Director on the occasion of the inter zonal tournaments. For games and sports runs on the single zone basis, direct selection is made by a committee specially constituted for the purpose, by the Director. The selected teams are put to special intensive coaching under the supervision of the coaches. The camps provide opportunities for practice, training and competition.

Knitting for Players: University Players are accorded with uniforms, tracksuits and accessories.

Scholarships: Two types of scholarships are given by the University.

i. Sports Training Incentive of Rs. 4000/- each for the All India Inter-University medal winners.

ii. Sports Talent Scholarships of Rs. 1200/- each for Kerala University team members, who are not covered by the former scheme.

Grace marks: Grace Marks are awarded to sports persons who excel in University, State, National and International sports and games competitions. The awarding of grace marks are monitored by the Department. For UG Degree Programmes, a maximum of 25% and for Professional and PG Degree Programmes, a maximum of 8% marks shall be awarded on the basis of their performance as per the University order.

The Department has envisaged some extension activities other than routine work to ensure its social commitment which includes Annual Summer Coaching Camp for School Students and Yoga Training programme for the general public. 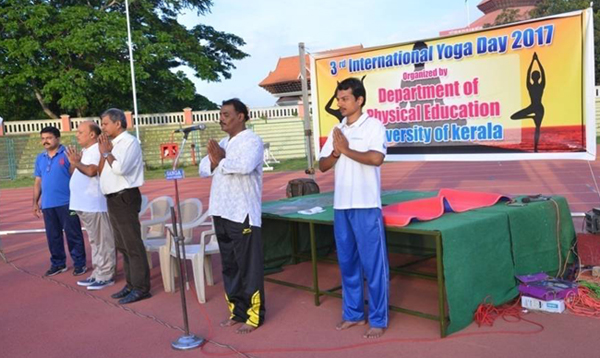 Annual Summer Coaching Camps are regularly conducted at the University Stadium every year to impart basic training and inspire school children in the sports and games as a part of extension service. Basic training was given to the school children in Athletics, Football and Yoga during the camp. Certificates were presented to the children who had successfully completed the coaching camp.

One Month Yoga Training Programme is conducted throughout the year for the public. The yoga practice encourages people to develop health, decision-making skills, concentration, problem solving, determination, control of emotions and helps in relieving stress. Therapeutic applications of Yoga practices are also imparted through yoga session to restore balance and health.

The Annual Fixture Meeting for the academic year 2016 -'17 was held on 22nd July 2016 at the University Senate Chamber. The Hon'ble Pro-Vice Chancellor, Dr. N. Veeramanikantan inaugurated the Fixture Meeting for the year 2016 -'17. An official website of the department has been launched by the Hon'ble Vice Chancellor Prof. (Dr.) P. K. Radhakrishnan. The Physical Education teachers from various affiliated colleges under University of Kerala attended the meeting.

The business session of the Fixture meeting had detailed discussion and deliberations on various issues relating to the conduct of Intercollegiate Tournaments and participation of University teams in the All India Inter University Championships. Sri. Aji.P.L, Asst. Professor, Govt. Sanskrit College, TVPM and Sri. Sujith Prabhakar, Asst. Professor, S.N College, Kollam were nominated as South Zone and North Zone Conveners respectively for the smooth conduct of the Inter Collegiate Tournaments.

© 2020 University of Kerala. All rights reserved